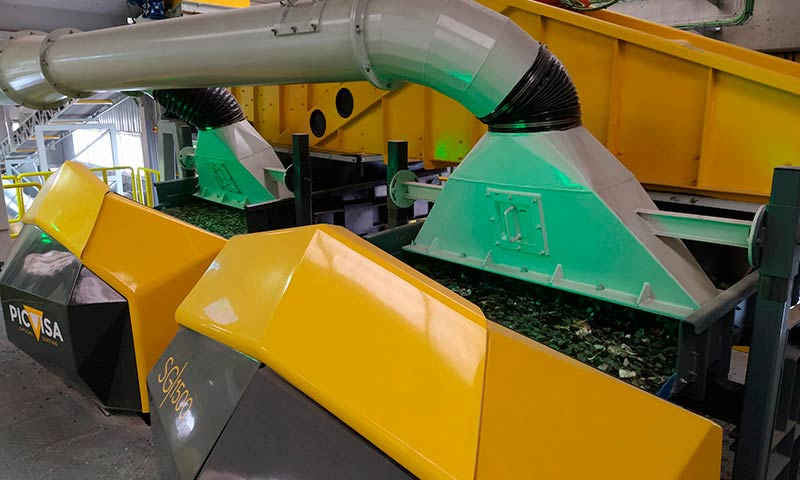 Verallia and TM Alcudia Reciclatges joined forces to build a glass recycling plant in the province of Guadalajara. The companies have invested nearly 7 million euros in this new glass recycling company, called Calcín Ibérico, which has the most modern technology and a high treatment capacity: up to 25 T/h.

The calcín or recycled glass shell is necessary for the production of glass containers, since its use, in addition to contributing positively to the environment, reduces the consumption of raw materials and energy. According to the circular economy report produced by Ernst & Young for FEVE, over the last 40 years, the European glass industry has reduced CO2 emissions into the atmosphere by 70%, partly thanks to the use of calcine.

With this new company strategically located in Guadalajara, TM Alcudia Reciclatges and Verallia expect to treat most of the glass waste generated in the neighbouring community of Madrid as well as that of Castilla La Mancha.

The company awarded to carry out this work was PICVISA. The design chosen for the treatment plant includes a high degree of automation that allows a high recovery of recyclable materials according to the defined indicators. As an example of this innovation and automation, the material dosing boxes are equipped with a laser sensor that measures the height of the stored material and warns the operator when he has to refill them so that the plant does not stop at any moment due to lack of material. In addition, the plant also incorporates weighing cells integrated into two of the conveyor belts that allow the operator to know at all times what material is being processed.

The plant has 7 PICVISA optical sorters of the SG1500 range to separate the impurities and classify the glass by colour (white and mixed). The set of optics processes more than 25t/h of waste with a high recovery performance of maximum quality.

Due to the short period of time in which this project has been carried out, PICVISA has worked in shifts during the 24 hours of the day and with a great coordination with the suppliers and the responsible TM Alcudia Reciclatges and Verallia. Thanks to this transversal coordination between all the actors of the work and the great work atmosphere generated, PICVISA and Calcín Ibérico are already working on their new and second collaboration.